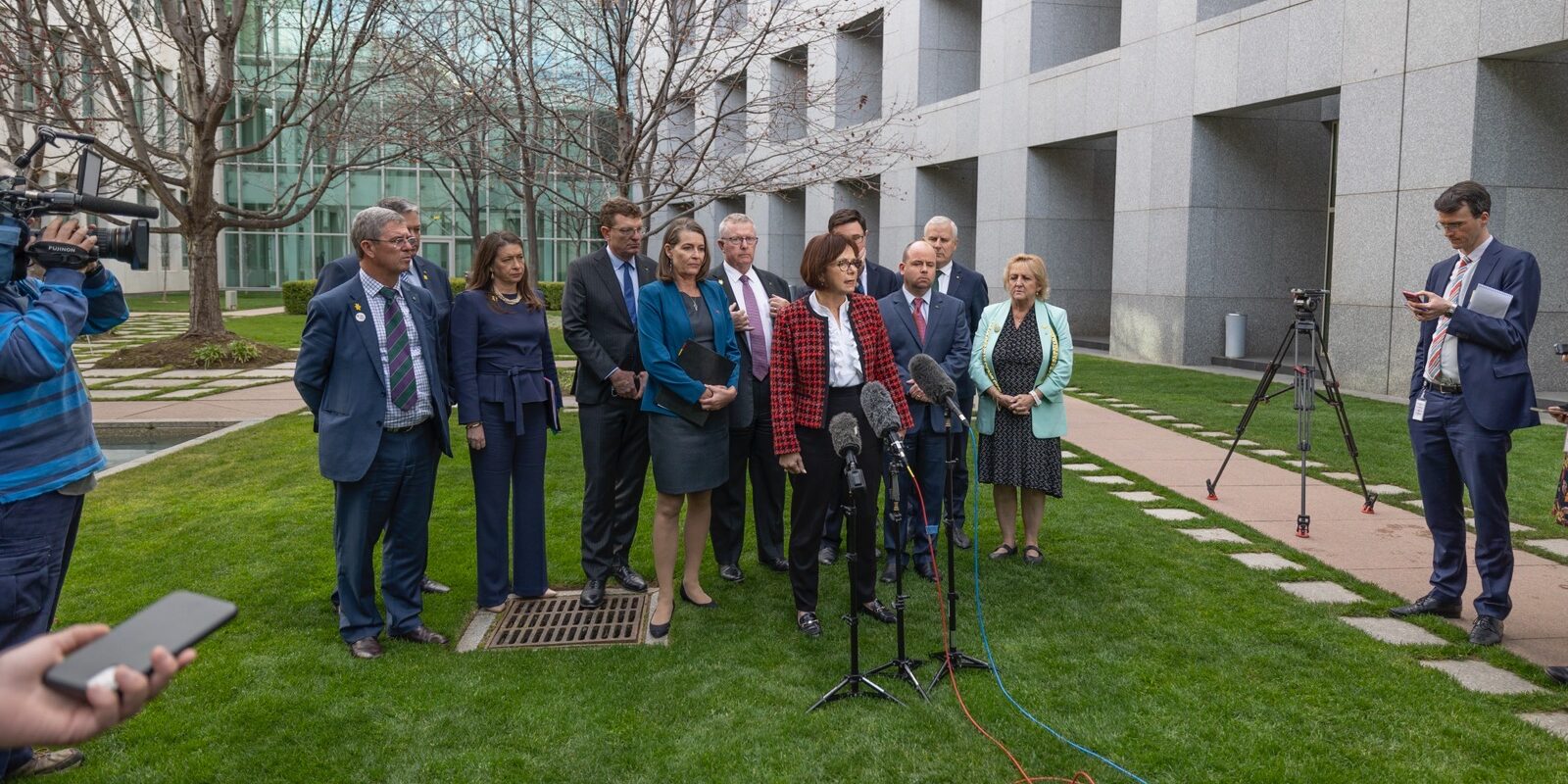 Right. Well, thank you all very much for coming this afternoon. The reason why we’ve called you here is that today we saw the Minister for Water, Tanya Plibersek, mislead the chamber. The Minister stood up in response to a question from the Member for Mayo, Rebekha Sharkie, and said that the previous government had only recovered two gigalitres of water under the 450 clause of the Murray-Darling Basin Plan.

Her own website, this one here shows that 23.3 gigalitres have been recovered. Under that program, 21 gigalitres was approved and contracted under our government. The remaining two gigalitres were assessed under our government but have only been contracted post the election. But the most frustrating thing about what the Water Minister has said, she says the 450 is for South Australia. Nowhere in the Basin Plan does it say that any of the water recovery is specifically for any particular state.

So this concentration on one simple clause and only half of the clause of the Basin Plan the 450 is ignoring all the exceptional work that has gone before it. The other thing that is important to note and that the Minister said today, she said it is Labor’s Basin Plan.

Absolutely. She’s 100% right and Labor’s Basin Plan said that that full 450 gigalitres could not be recovered unless it was neutral or beneficial socio and economic impacts. Now this 23 gigalitres that have been approved that were assessed under our Government.

21 gigalitres contracted by our government met the social and economic assessment criteria that was agreed by all Murray-Darling Basin state ministers in 2018. Under our watch, because our Government heard the cries from communities that they wanted their socio economic stability safeguarded and that is the most fundamental part of this section of the Basin Plan.

So I call on the Minister as she pursues just the 450. But she must maintain that social and economic assessment criteria, as agreed to by all states. Now, since she was appointed minister, she’s been to Indonesia, she’s been to environmental conferences, and I applaud her for that.

But she’s only flown over Nimmie-Caira, she’s visited Mildura despite being invited by myself to Deniliquin, by my colleague Sam Birrell, to Shepparton and Anne Webster to Mildura and other sections of the Mallee and all of our Murray-Darling Basin. All Members of Parliament would appreciate seeing the Minister. Certainly Mark Coulton from Parkes would like to show her the Menindee Lakes and the reality that if you go head to leather for the full 450. Without consideration of the impacts you will see more fish kills.

You will see the Menindee Lakes drained faster. And that is a concern and that is why things like the constraints management strategy have not yet been signed off because we’ve got to work with communities and we’ve got to make sure that we are not causing environmental damage in one place in order to meet our arbitrary target in another. So that’s it for me for the moment. But I would like you to hear from my colleagues from the basin, because this is about their communities. This is about people as well as the environment. And this is about the people who live in those environments. So I will hand over.

Thanks Perin. And what I can say what this government has done today is to try and reignite the water wars. It shows an utter disrespect and disregard to the trauma, to the hurt that those Basin communities have endured through this plan.

They’ve taken it on the chin and I’ve seen the trauma firsthand in my own electorate as part of this basin. I’ve had a 60 year old man who owned a butcher shop in a small country town, which was his own superannuation.

Was that shop was worth three fifths of bugger all because of this basin plan. He had nothing to look forward to and was on the verge of committing suicide. That’s the human toll. That’s the human trauma that this plan has inflicted on regional communities.

They pick themselves up and they’ve got on with it. They’ve sucked it up as much as it hurt. And now we have a government that’s going against the very plan that they put in place. And I can tell you, I know that intimately, because I was the one that negotiated with the States on the neutrality test on that for years.

That was akin to getting peace in the Middle East. You have South Australia, Victoria and New South Wales, Queensland. I think we all agree that there should be a social and economic neutrality test because of that human trauma, that human toll that has been inflicted on millions of regional Australians.

This was settled in the last 20% of this planet and we should be damn proud of the fact that we have recovered 80% of what this plan was set out to do. The last 20% can be achieved through infrastructure.

Can I say that to Sam Birrell who’ve seen this and probably seen in his communities more than any other community I’ve seen up and down the basin, the trauma. He’s seeing there.

Yeah. Thanks. Thanks, David. The people of Nicholls elected me in part because they’re so concerned about water, what is the lifeblood of our economy. And a lot of it’s gone under the plan. The extra 450 gigalitres, as the Act says, has to go through a socio economic neutrality test.

Now words matter. Right. Words matter. Socio and economic. Socio mean society. And if that water is taken out of consumptive use in agriculture, in my electorate, society suffers. Now the farmer might sell it. That’s fine. And that farmer might get a good price for it.

But that water was growing milk, pears, apples, peaches, and getting that food to be processed or sent to market employs so many people, that water goes, that food goes, and those jobs go. And that’s why the people in my electorate in Shepparton, Cobram, Yarrawonga, Nathalia and Numurkah, true all around that part of the Goulburn Murray Irrigation District are so concerned by a government that wants to rip the economic lifeblood out of this electorate that sent me here.

And that’s why I’m speaking about it so passionately. They’ve already given up a lot of water. It’s caused a lot of pain. There is a lot of environmental water in the pool ripping this extra 450 will hurt the economy and hurt society. So it cannot be socio economically neutral. And so someone in my electorate of Valley.

In my electorate of Mallee we have lost three quarters of the dairy farms who relied on water. It became unaffordable and it was just never going to work. That is broken communities. We now have a patchwork of farms where people can’t actually put water back on that farm.

Thanks to the Labor government’s Murray-Darling Basin Plan, we as a government, when we were in government, tried to work and understand our communities and the needs that they have, the socio economic test, there is no way that more water can come out from our farms. There should be no more buybacks ever.

I moved the motion of disallowance for the Murray-Darling Basin because I didn’t want to see any more buybacks and that became the Coalition’s policy, the Liberals policy and very much The Nationals policy we do not want to see.

We cannot afford any more buybacks, any more of our river communities hurt. The Goolwa announcement back in 2012. Yes, to win an election for Labor was done so that there was a triple bottom line approach. It was always that provision within that additional 450 gigalitres, always that condition that those river communities would not have social and economic detriments to their communities.

These farmers are the best environmentalists in all of Australia. They want nothing more than a good environment because the river sustains them. Of course, whether it’s the Murrumbidgee, the Murray, the Lachlan, wherever – they want good outcomes, they can’t afford to have 450 gigalitres taken, look there’s time for Minister Plibersek to go back into the Parliament today and correct the record. Maybe she didn’t know. We’ll give you the benefit of the doubt. But what we can’t see, what we cannot see is 450 additional gigalitres going out. Because it’ll hurt those rural communities far too much.

A collective chill went up the spine of the residents of the third of the Murray-Darling Basin that are in the Parkes electorate. From Boggabilla to the Lower Darling below Menindee. Those communities have been undertaking the process of water reform for more than 25 years.

The Murray-Darling Basin Plan was the last part of that. It’s nearly completed. The 450 gigalitres was a political announcement made before the 2013 election as a sop for South Australia. And it’s going to be the towns, the communities, the farmers and the residents of the Parkes electorate are in line to pay that price and they will not stand for it.