The Australian: Complaints to energy watchdog double amid crisis

You are here:
In The News 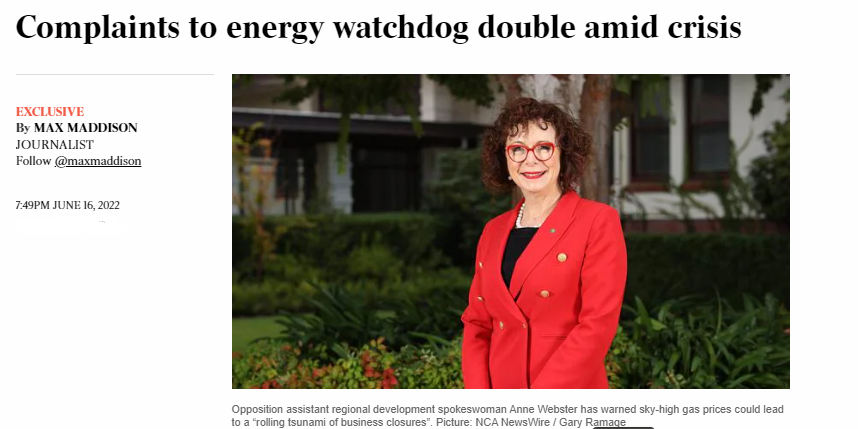 Complaints about the conduct of energy companies almost doubled to 761 in May as the energy crisis wracked the eastern seaboard amid fears there would be a “rolling tsunami of business ­closures” in regional Australia.

The Australian can reveal complaints to the Australian Competition & Consumer Commission and Australian Energy Regulator, a subsidiary of the consumer watchdog, have risen dramatically to 710 reports in May, sharply up from a monthly average of 400. Halfway through June, the regulators have already received 361 reports.

Concerns about the conduct of energy companies crystallised after Advance Bricks – an 82-year-old, family-run business in Victoria – had to cease operations after being pushed onto the sky-high default gas rate.

The Australian had previously revealed EnergyAustralia was strongarming industrial users into accepting 12-month contracts at inflated prices, leading one manufacturer to write to the ACCC and Energy and Water Ombudsman, complaining EnergyAustralia’s conduct threatened his business’ viability.

In response to questions, a spokeswoman for the ACCC said the reasons for the reports were varied, adding: “We are acutely aware of the pressure that rising energy prices are placing on consumers and businesses.

“As well as monitoring the electricity and gas markets in-line with our ongoing role, we will be watching closely for anti-competitive or misleading conduct that could harm consumers.”

A spokesman for EnergyAustralia said Stawell, where Advance Brinks is located, was an “open market” and welcomed more competition in the area.

“While access to firm and affordable gas from producers is problematic at this time, we would like to work with Advance Bricks and Pavers, and indeed any of our customers, who might be struggling now,” he said.

James Thompson, chief executive of agribusiness Luv-A-Duck, said he had lodged a complaint with the Energy and Water Ombudsman after the company’s monthly electricity bill almost quadrupled, soaring from $35,000 to $120,000 per month. While declining to name or the provider, Mr Thompson said the increase was “nonsensical”.

Opposition assistant regional development spokeswoman Anne Webster said she was in contact with half a dozen businesses in her electorate who had expressed concern about the viability of their business. She said the closure of Advance Bricks could be the tip of the iceberg.

“I worry that it’s going to be a rolling tsunami of business closures because it makes businesses unviable and cannot operate due to the insecurity, the soaring cost and the lack of energy reliability,” Dr Webster said.

She said EnergyAustralia’s monopolisation of the Carisbrook to Horsham gas pipeline in western Victoria was unsustainable, and urged the government to implement two ACCC recommendations outlined in an interim report in January 2020.

The first included a capacity surrender mechanism providing the release of capacity by an incumbent retailer to other shippers; the second prohibited operators from engaging in behaviour that would “prevent or hinder access to the pipeline”.